skip to main | skip to sidebar

The True Story of a Big, Homeless Dog and a Disabled Girl 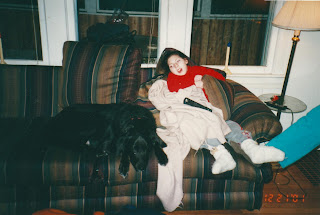 "Two Dogs and a Shelter"
by
Lisa Saunders

I cringed. After all these years, why couldn’t she take “no” as the final answer? Not only did I know who really ends up walking it in the pouring rain, but we also had a daughter, Elizabeth, who was quadriplegic from cerebral palsy (I caught cytomegalovirus--CMV-- during my pregnancy). She was unable to protect herself against a frisky animal like the cat we briefly owned that clawed her face.

Instead of arguing with Jackie again about why she couldn’t have a dog, I just reiterated the promise I had made to her six years earlier: “If God Himself brings a dog our door, then you can have it. Only then will I assume it’s a sign that the dog will be gentle around your sister." Jackie and my husband, Jim, decided that if that day should ever come, they would name the dog Riley after the dog in the movie, "Homeward Bound II.”

Unbelievably, a few weeks after that New Year’s Eve, a big, brown female puppy, shivering cold, wet and dirty, tried to jump into our car as we were leaving to go out with friends.

Stunned, I knew Jim and I had to honor our pledge. But first, I ran "found" ads, put up posters, and called the police. Reporting her to our local animal shelter, Donald, the Assistant Director, said that an overwhelmed owner--who probably received the puppy as a Christmas present--had dumped her.

Jackie wouldn't name the puppy Riley because she only knew male dogs named Riley, so she called her Gabrielle-Gabby for short.

Now I was the overwhelmed owner. Not only did Gabby urinate all over our new wall to wall carpets and chew on everything, she was a nipper. She'd playfully attack all passing ankles and grab Elizabeth's feet dangling over the couch with her razor sharp teeth. Many nights I lay awake worried she'd hurt Elizabeth someday.

Suddenly a solution occurred to me. Perhaps Jackie would agree to upgrade the dog for an older, calmer one sitting in an animal shelter? Moments after having that thought, Jackie started screaming from the laundry room, "Dad, get Gabby off me! She's attacking my feet again."

That's it. Without saying a word, I picked up the phone and dialed Donald at the shelter. "Help! The puppy we took in a month ago is driving us crazy. Can you find her another home?"

"Puppies are easy, I can find her a home within a week."

"Do you have an older, calmer dog? I have a handicapped child, so I really must be certain."

"As a matter of fact, I have a big, fat, lazy male Lab-mix, who wants nothing more than to lie on a couch all day. He's not only a couch potato, he's the whole sack of potatoes!"

Jackie felt sad on the trip to the shelter with Gabby on her lap, yet awed by the name of the dog we would be bringing home. "Mom, that's got to be a sign."

She was right. Not only did the 100-pound Riley come fully neutered with up to date shots, he was completely housebroken. As soon as he got settled into our house, I patted the couch next to Elizabeth letting him know he was welcome to join her--and he did just that. Like Elizabeth, Riley was considered a misfit because he couldn't do much. He didn't know how to fetch, play with a toy or chew on a rawhide, but he did know how to jump on the couch and keep Elizabeth warm without stepping on her.

Jackie finally had a dog and Elizabeth finally had a companion who understood her. It became my pleasure to walk our carpet-friendly couch potato--even in the pouring rain!

End Note: I later learned that Gabby was adopted within a week of being dropped off at the shelter and that her new family had broken her nipping habit. She was making her new home as happy as Riley had made ours.

You can see a photo of Elizabeth and Riley on this short USA News clip tells their story along with how my daughters disabilities could have been prevented. Click on:  USA 9 News clip.

You can read the beginning of my memoir about Elizabeth and Riley online by clicking on the "LOOK INSIDE" feature found at:  "Anything But a Dog! The perfect pet for a girl with congenital CMV."

Thank you so much for taking the time to get to know my daughter and the homeless, old dog who loved her.

Lisa Saunders
www.authorlisasaunders.com
Autographed copies of "Anything But a Dog!" are available by writing to me directly at saundersbooks@aol.com
Posted by Lisa Saunders at 6:31 AM

Buy Anything But a Dog!

Anything But a Dog! News

Lisa Saunders
I love to write about history and the people I know--living and dead!